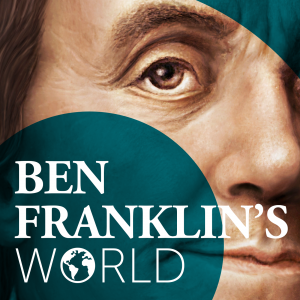 Ben Franklin’s World is a Podcast About Early American History

I chose the title Ben Franklin’s World because nearly everyone knows who Ben Franklin was and when he lived. I also chose Franklin because his worldly life and legacy allow me to discuss early American history in its broadest sense.

Neither colonial North America nor the United States developed apart from the rest of the world. Both the colonies and the fledgling United States participated in the politics, economics, and culture of the Atlantic World. Events in Europe, Africa, the Caribbean, and South America affected the way North Americans lived, dressed, worshipped, conducted business, and exercised diplomacy.

Benjamin Franklin took an active part in the Atlantic World; he was a world traveler and a consummate learner. He helped found the United States and influenced technological developments after his death. The spirit of Benjamin Franklin provides this podcast with the freedom to discuss early American History between the 17th and early 19th centuries.

Most episodes of Ben Franklin’s World: A Podcast About Early American History contain an interview with a guest historian and a time warp question.

Guest Interview: This segment stands as the centerpiece of the podcast. It is where I interview a historian who has conducted (or is conducting) fascinating research about a person, people, places, and events in early American history.

On occasion, I substitute an interview with a single guest with a narrative story that incorporates interviews with multiple guest experts.

Time Warp: This post-interview segment is where guests respond to a hypothetical history question about what might have been if something had occurred differently or if someone had acted differently.

Would you like more information about Ben Franklin's World? Send me an e-mail or a toot.