Episode 166: Freedom and the American Revolution

The Declaration of Independence described “all men” as “created equal” when its authors knew they were not. So was the revolutionary idea of freedom dependent on slavery?

In this last episode of the Doing History: To the Revolution series we return to the place our series began: the world of Paul Revere. We speak with Christopher Cameron, an associate professor of history at the University of North Carolina-Charlotte, to discuss how Phillis Wheatley, Cesar Sarter and other black revolutionaries in Massachusetts grappled with the seeming paradox of American freedom as they fought to end slavery during the American Revolution. 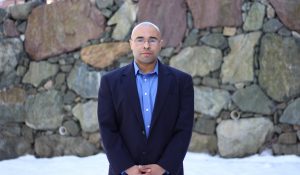 Christopher Cameron, an associate professor of history at the University of North Carolina-Charlotte and author of To Plead Our Own Cause: African Americans in Massachusetts and the Making of the Antislavery Movement, joins us to discuss how Phillis Wheatley, Cesar Sarter and other black revolutionaries grappled with the seeming paradox of American freedom as they fought to end slavery during the American Revolution.

Episode 166: Freedom and the American Revolution