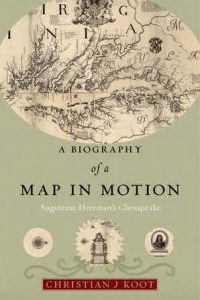 How do empires come to be? How are empires made and who makes them?

What role do maps play in making empires?

Christian Koot is a Professor of History at Towson University and the author of A Biography of a Map in Motion: Augustine Herrman’s Chesapeake. Christian has researched and written two books about the seventeenth-century Anglo-Dutch World to better understand empires and how they are made. Today, he joins us to take us through his research and to share what one specific map, Augustine Herrman’s 1673 map Virginia and Maryland, reveals about empire and empire making.

Christian Koot, a Professor of History at Towson University, has researched and written two books about the seventeenth-century Anglo-Dutch World to investigate how empires are made and who makes them.

Using details from his book, A Biography of A Map in Motion, Christian reveals information about a merchant named Augustine Herrman and how Herrman became a mapmaker; The seventeenth-century world of Virginia, Maryland, and New Netherland; And details about Herrman’s 1673 map Virginia and Maryland, and what Herrman’s map reveals about empire and empire making in the seventeenth century.